We are currently in the planning phase for a building a new house. Among the many decisions is the main lighting in the rooms. Well – regular light bulbs are not available any more – so what else is there? What about LEDs mounted to the ceiling?

On ebay I found various LED spots that looked very similar – at a price of 2-4 Euro / piece, including a 230V converter. These are the ones I got: 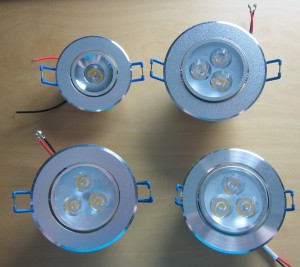 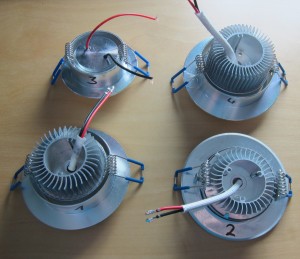 Although they look ok on the photo – they are quite flimsy. The voltage converters are even worse – I don’t trust them and I haven’t done any testing yet. 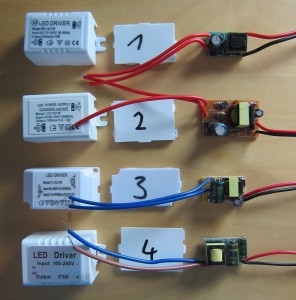 So what about the light? without the voltage converter, all of the LEDs are 300mA constant current LEDs – so no problem to have a look (number 3 broke down): 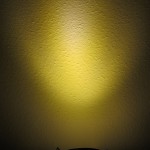 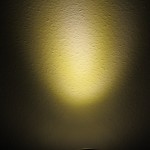 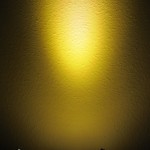 The light is not very even and has a lot of weird colors on the border – I can’t even decide on a color temperature. I suspect that this is the result of the cheap plastic lenses. No matter what – I’m not going to build them into my house!

In the meantime I ordered some more lights – this time directly via aliexpress. I got a silver and a white one. AT 2,70 Euro each (including shipping!) they were even cheaper: 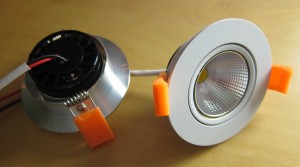 Wow – this is a totally new quality! Much more sturdy, with a single COB led inside. There is no lens – and thus no colored fringes any more! They still come with the cheap converter as the led itself requires a 300mA constant current at about 10V.

I also ordered a conversion module with a wide range input (12-36V DC) that generates 300mA constant current. A bargain – a pack of 10 came for less than 10 Euros! In combination, I can attach the led with fixtures to a regular 24V system: 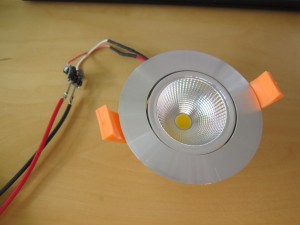 For less than 4 Euro/piece this is a really high quality lamp that can be attached to a 24V system – some assembly required.

So what would you install in a professional environment? A lot of systems are based on 24V, including current regulated led strips from Bilton, led panels and my favorite Voltus LED spot. They have a defined color temperature, a defined CRI and are dimmable and can fit into a standard MR16 lamp carrier! There are even G4 LEDs available with the same color temperature…

In comparison, they are much brighter (which is to be expected at 6 W) and slightly more uniform. With a front glass there is no dust inside. But with a Brumberg 006325 lamp carrier the price is up at 36 Euro / piece. Ouch.

We’ll see how this ends up…